This simple Breakfast Burrito Recipe is perfect to keep you going all day, filled with eggs, cheese, bacon, potatoes and spinach. Breakfast Burritos are such a delicious way to start the day!! 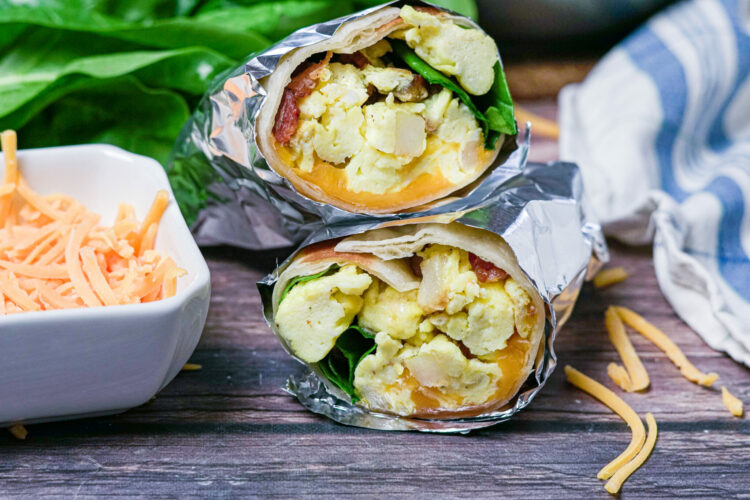 We love making this simple breakfast burrito recipe for busy mornings when you need to rush out the door. These burritos come together really quick and only have a few simple ingredients.

My kids love to stop at this little Mexican restaurant near us for breakfast burritos, so of course we had to come up with our own simple recipe, and I must say, these are spot on! 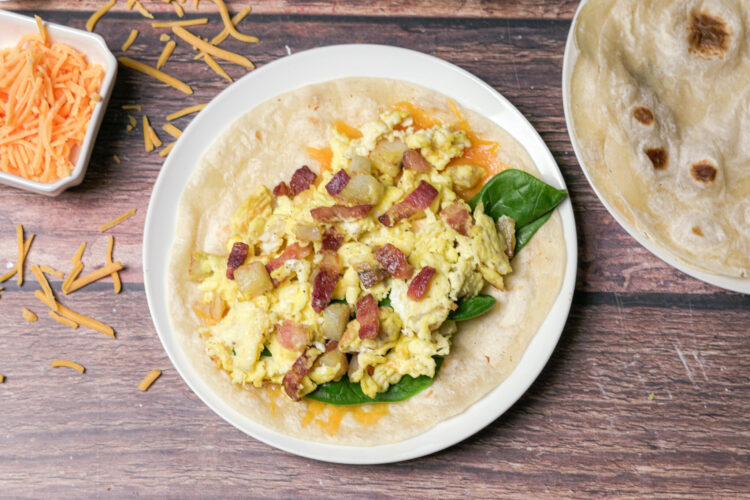 How to make Homemade Breakfast Burritos

Let’s jump right in on how to make these simple breakfast burritos. To make this recipe, start with the bacon. Take 6 strips of bacon and slice into bite sized pieces. Add to a large, 12 inch skillet and cook and stir. 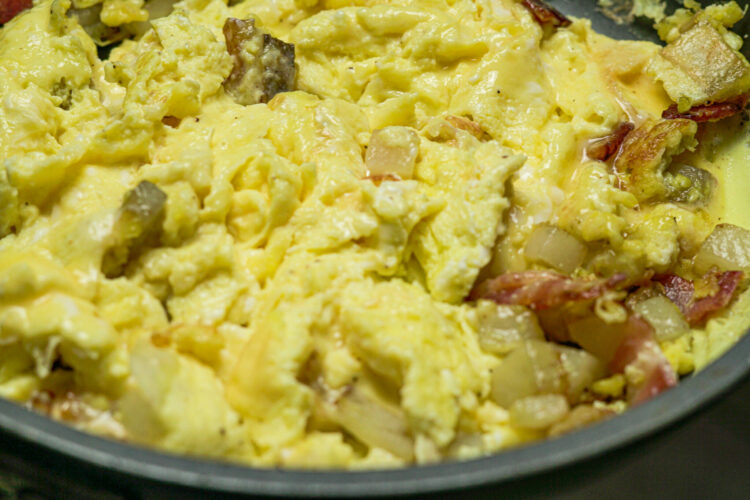 In a mixing bowl, whisk the eggs with 2 tablespoons cold water, until they are yellow and fluffy.

Remove the bacon grease from the pan, leaving about 1 tablespoon in the pan to cook the eggs. Pour the eggs into the skillet with the bacon and potatoes. Scramble the eggs by pulling them in from the sides as the cook.

Continue to scrap around the edges, folding the eggs over until they are cooked through. Place some shredded cheese in the center of a warm tortilla, with a few leaves of spinach. Top with the eggs, bacon and potato mixture. 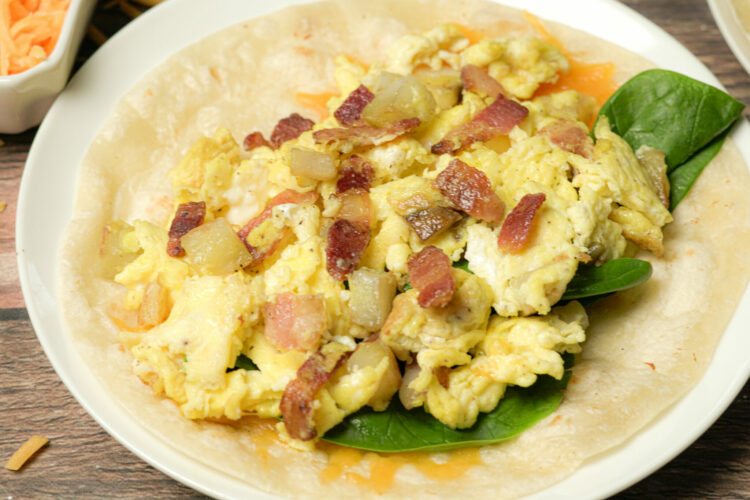 Now that you have got your burrito full of all the goodness, fold it up to keep everything inside. Fold the burrito by pulling up both edges just a few inches towards the center. Pick up one of the unfolded sides and pull it towards the center. Continue rolling the tortilla over until it is all folded into a nice burrito package. 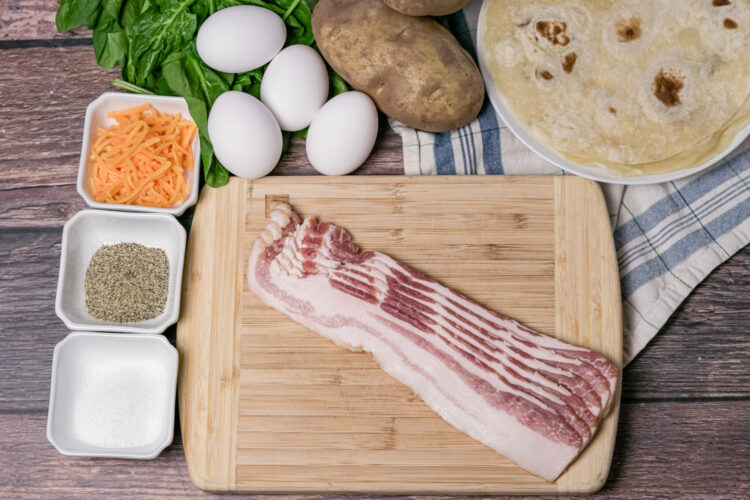 This is a pretty basic recipe for breakfast burritos. Just a few simple ingredients are needed for this simple recipe. 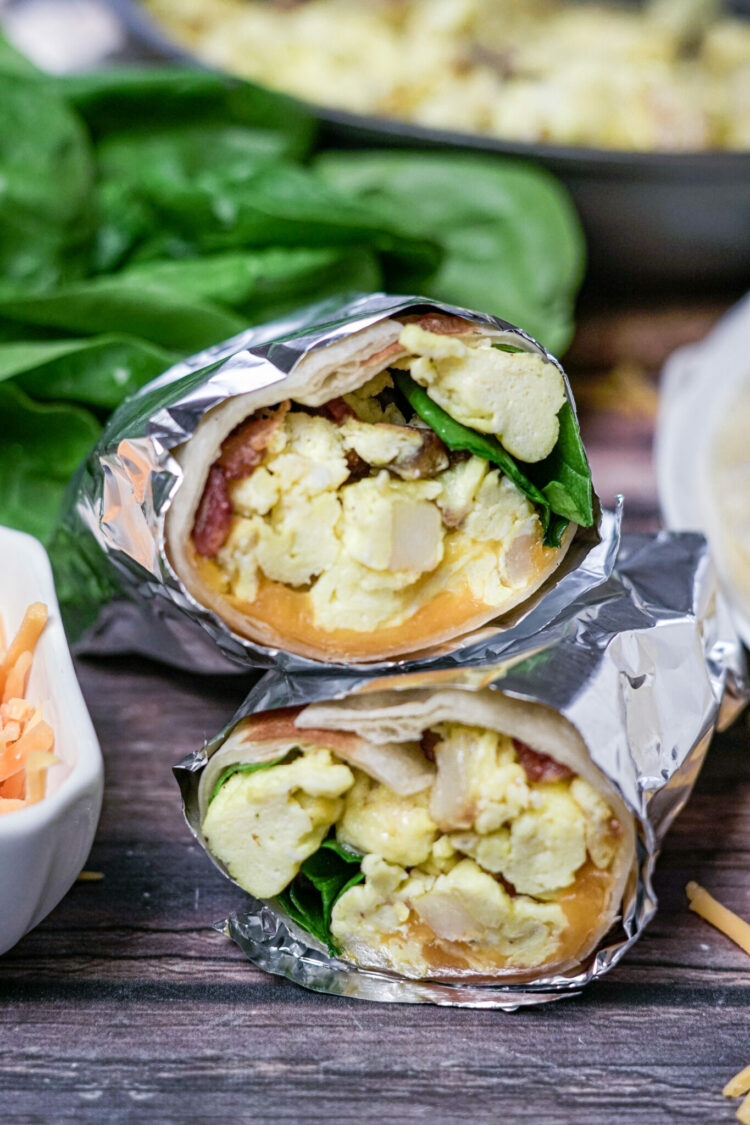 Substitutions in this Breakfast Burrito Recipe

There are many different ways you could make these breakfast burritos. Just a few substitutions or additions that we like to make are:

Go ahead and experiment, make this your own. 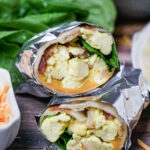 Other simple Breakfast, or Breakfast for dinner ideas: