Sheet Pan Shrimp Fajitas are such an easy, healthy meal. All cooked on one pan. Loaded with tasty shrimp, vegetables and a simple homemade fajita seasoning. This Shrimp Fajita Recipe will be on repeat.

Looking for other simple one pan meals? Check out my these other simple and quick recipes: Sweet and Sour Sausages or One Pan Chicken and Veggies. 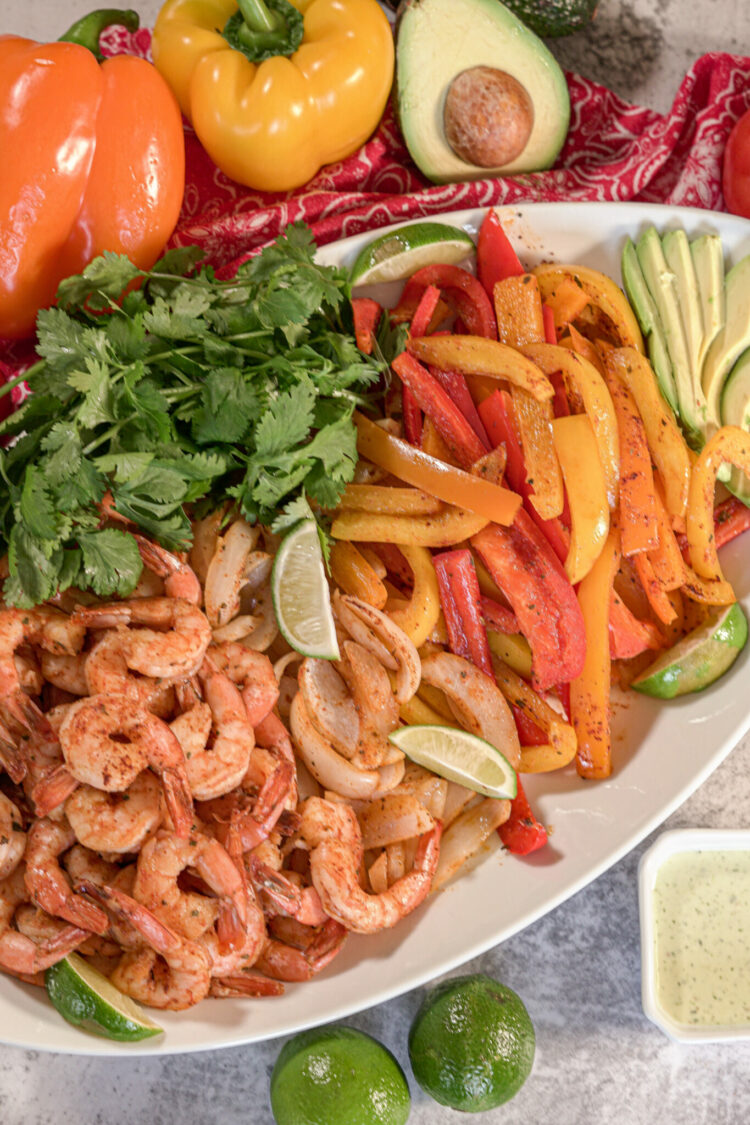 Sheet Pan Shrimp Fajitas are such an easy go to meal for busy weeknights! I know you are going to love the fact that these cook in under 20 minutes! Sometimes making dinner can seem so overwhelming because there are so many steps, but not with this shrimp fajita recipe.

For this easy fajita recipe the only prep you need to do is slice the pepper and onions and make an easy fajita seasoning. Throw it all on a sheet pan and dinner is served. Let’s get to the step by step for this shrimp fajitas recipe. 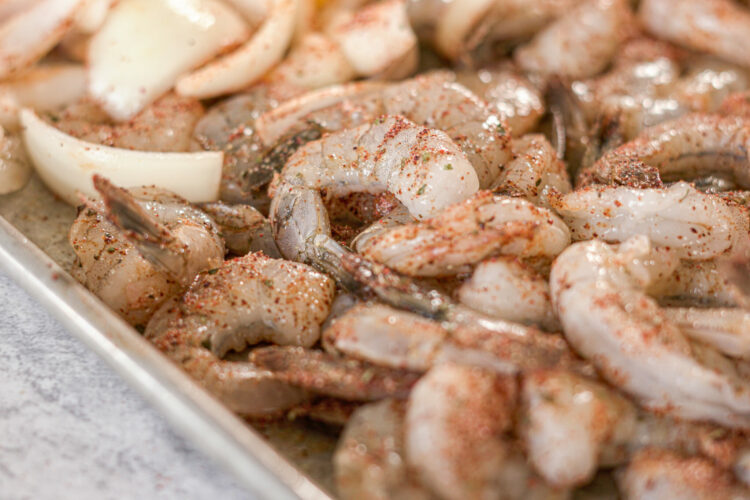 Just a few simple steps and dinner is on the table. Start by slicing your peppers and onions. The easiest way I have found to slice peppers is to slice off the top and the stem. Run your knife around the inside of the pepper to remove all of the seeds and ribs. Turn the pepper upside down and it should all fall out easily.

Then slice down one side to open the pepper and slice into 1/4-1/2 inch slices. Cut the onion in 2 halves and slice in slices as well. 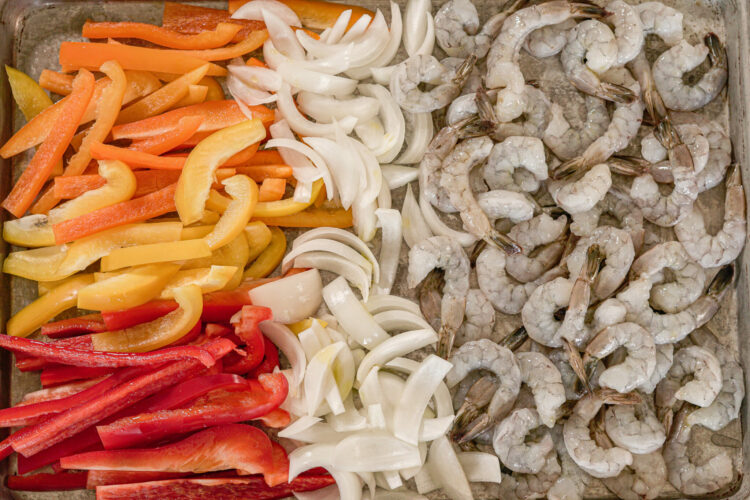 Place the sliced peppers, onions and shrimp onto a 21 x 15 inch baking sheet. Drizzle with olive oil and toss to make sure they are all covered.

In a small bowl combine the ingredients for the seasoning mix. Sprinkle over the vegetables and shrimp, toss and season again to make sure everything gets some seasoning.

Cook in a 400ºF oven for 10 minutes, give it a quick stir after 5 minutes. after 10 remove the shrimp. Place the peppers and onions under the broiler for an additional 2-3 minutes to give them a quick char. Remove from the oven and squeeze lime juice over the whole pan. 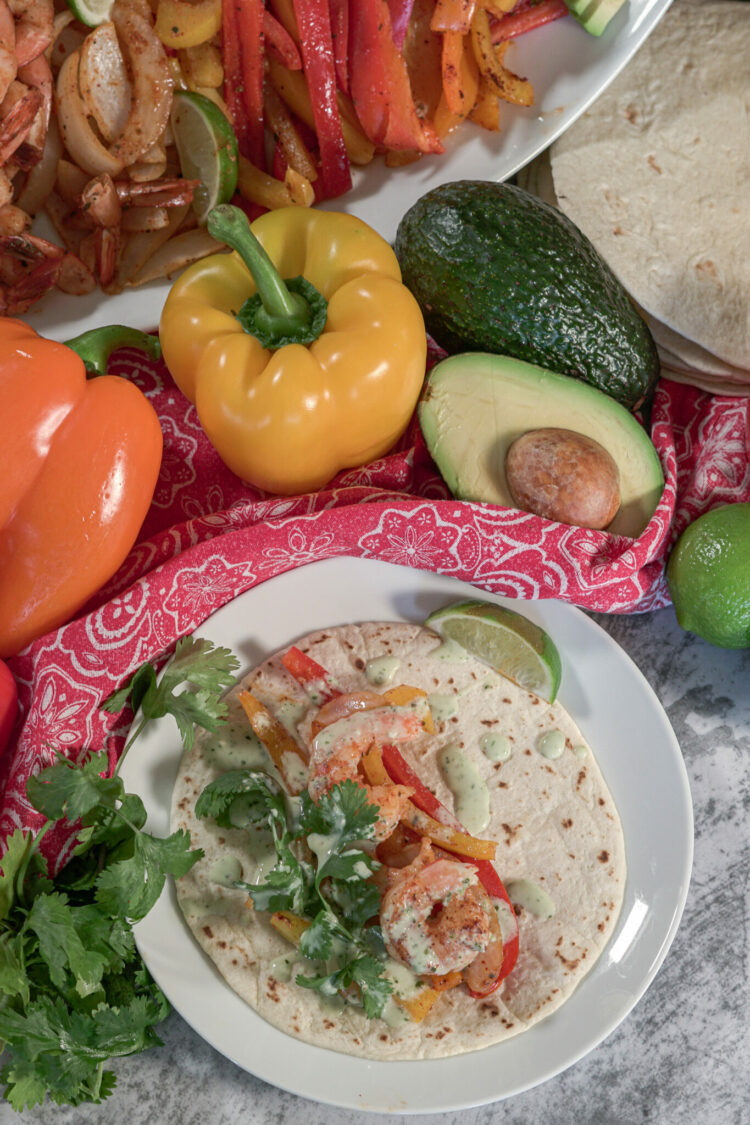 How to serve Shrimp Fajitas

These shrimp fajitas are flavorful enough to just serve in a flour tortilla with a little cilantro and a squeeze of lime juice.

Other ways to eat fajitas are with sour cream, avocados, tomatoes, lettuce or even cabbage. We like to drizzle a little cilantro lime ranch dressing, warm tortillas and avocados!! You can even make a simple Pico de Gallo to load on top!! 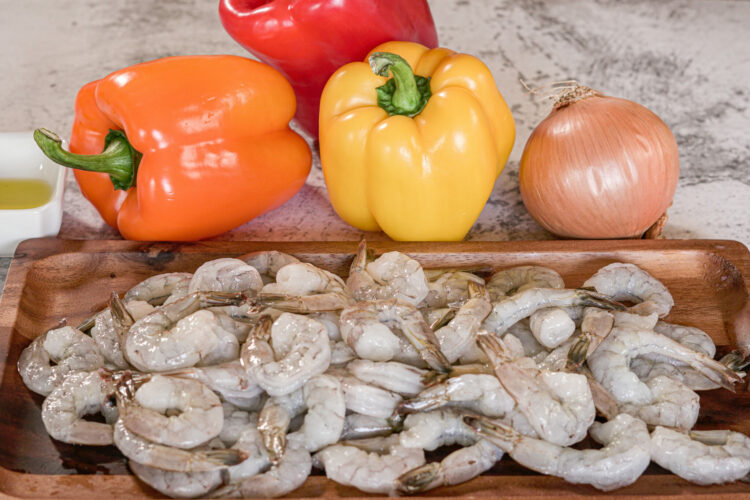 Ingredients for Shrimp Fajitas on a sheet pan 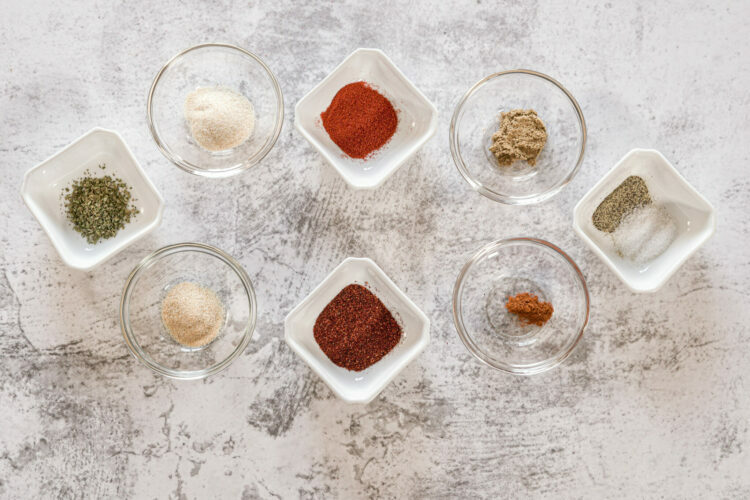 Sheet pan shrimp fajitas are such a simple and quick meal. I hope you give this easy meal a try! Enjoy! 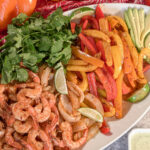 Sheet Pan Shrimp Fajitas are such an easy meal, all cooked on one pan. Loaded with tasty shrimp, vegetables and a simple homemade fajita seasoning. This Shrimp Fajita Recipe will be on repeat.

How to store leftover shrimp fajitas

Store any leftover shrimp and vegetables in a air tight container in the refrigerator for up to three days. Reheat in the microwave or on the stove in a pan over medium heat.