Caramel Apple Bread Pudding is a simple breakfast or brunch recipe loaded with apple slices, cinnamon, sugar, milk, cream, eggs and breadcrumbs. Baked just right, so it is like a tasty pudding all drizzled with a simple Caramel Sauce.

Looking for other simple breakfast ideas? Check out my recipes for Breakfast Hash and Easy German Pancakes. 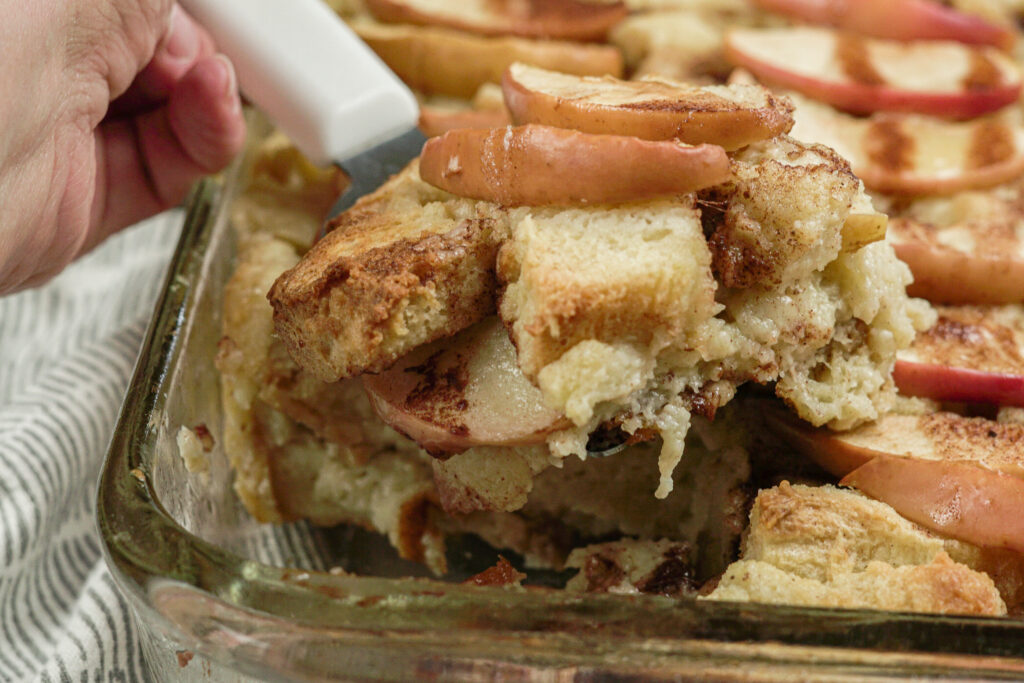 I have to admit, we actually eat this more for dinner than we do for breakfast!! It is so good and filling! It would even be good for dessert!! Apple Bread Pudding, the dish that is good for any meal, and don’t even get me started on the leftovers!! Some things are just better the next day, and this is one of them!!!

This Apple Bread Pudding Recipe makes a big 9 x 13 inch baking dish full and serves up to 16 people, or 12 if you want bigger slices.

I think you are going to be so happy with how quickly and easily this comes together! 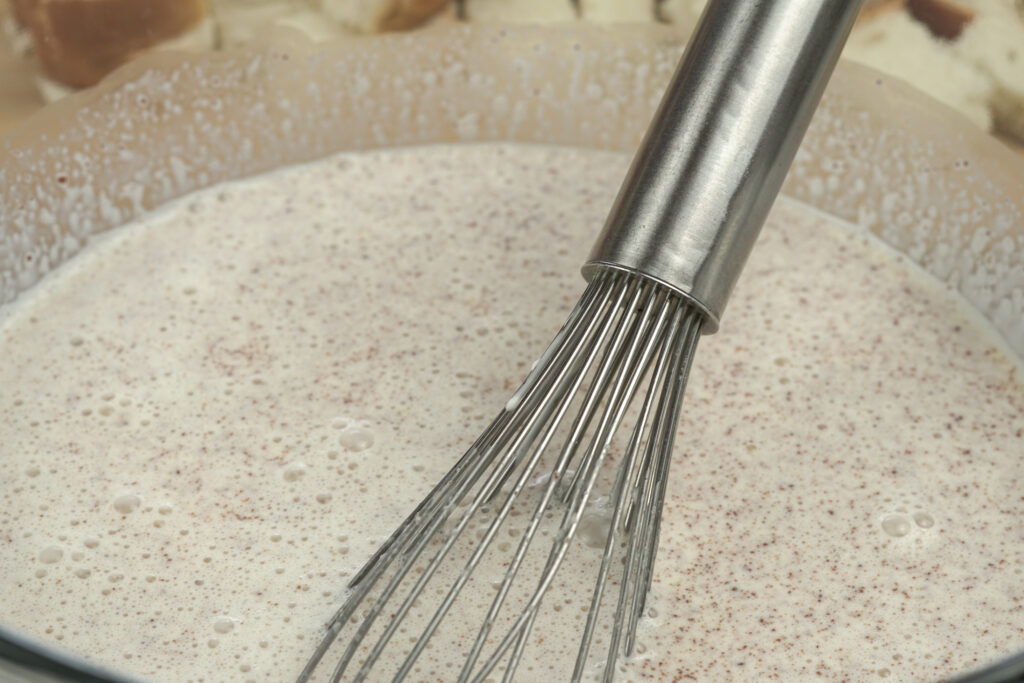 To make this simple recipe for Apple Bread Pudding start by melting the butter and mixing with one tablespoon of the sugar and half of the cinnamon.

Next, mix up the pudding mixture. Crack the eggs into a large mixing bowl and whisk until they are bubbly. Add in the remaining sugar, cinnamon, milk and cream. Whisk until well blended and the sugar is incorporated. 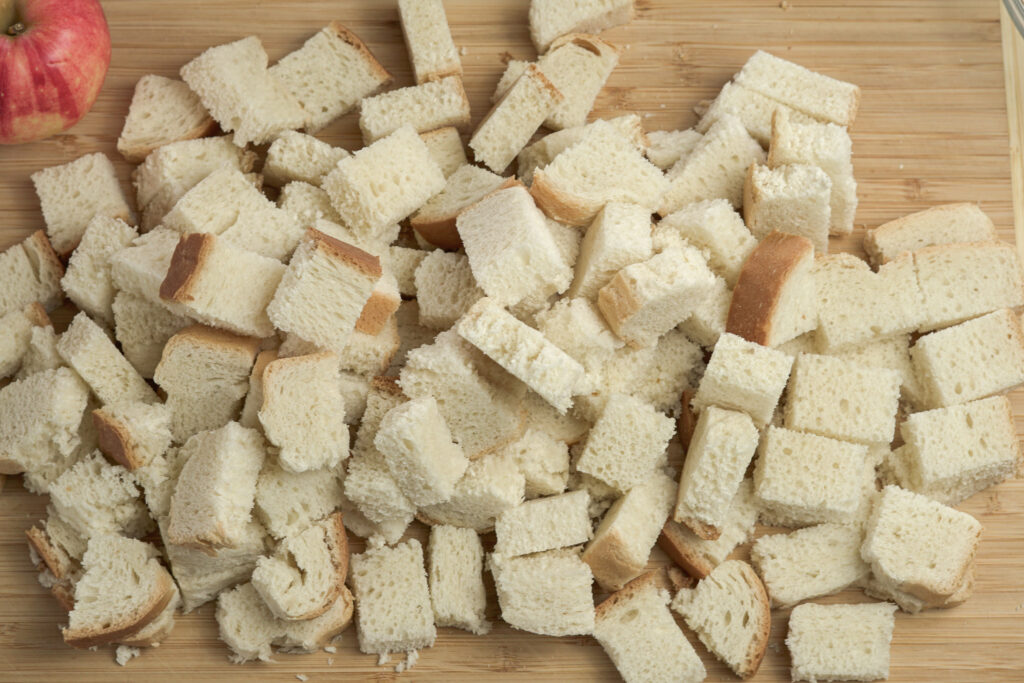 Slice the bread into one inch pieces and gentle fold into the pudding mixture. Grease a 9 x 13 inch baking dish with either cooking spray or butter.

Pour one half of the bread and cream mixture into the bottom of the prepared baking dish. Top with a layer of sliced apples. 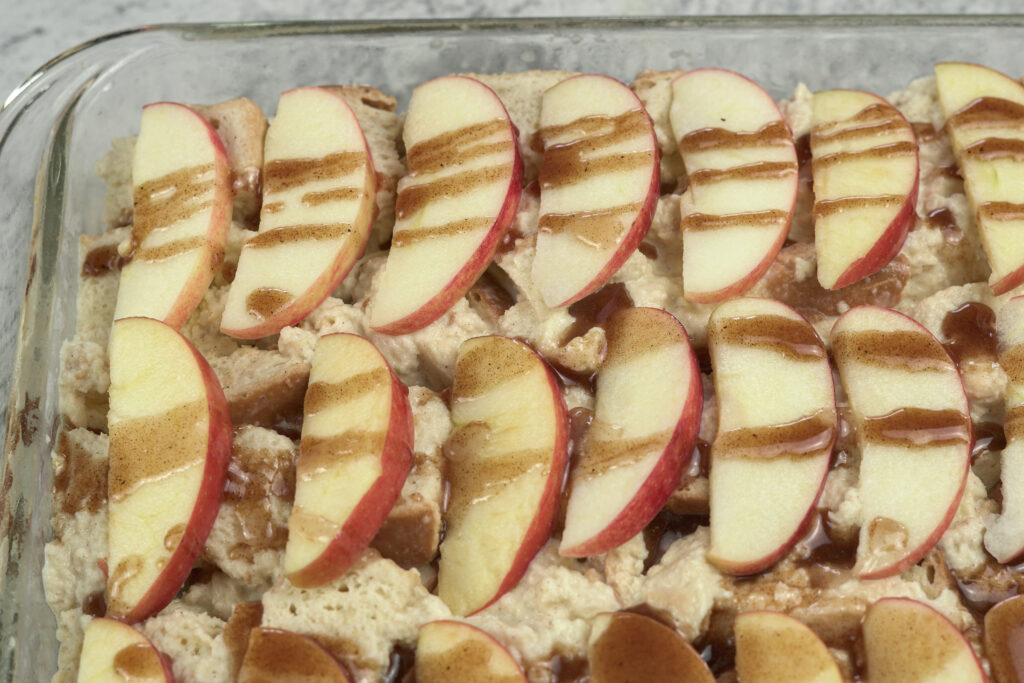 Pour the last of the bread and cream mixture on the apples, then placed the last layer of the apples on the top.

Drizzle the melted butter, sugar and cinnamon over the top.

Bake for 50 minutes in a 350ºF oven. The center will still be a bit jiggly when it is done cooking, but this is totally normal and how it should be. If you think it is not heated through, you can bake it for longer, but only do it in 5 minute increments.

Remove the apple bread pudding from the oven and allow to rest for 10-15 minutes before serving. 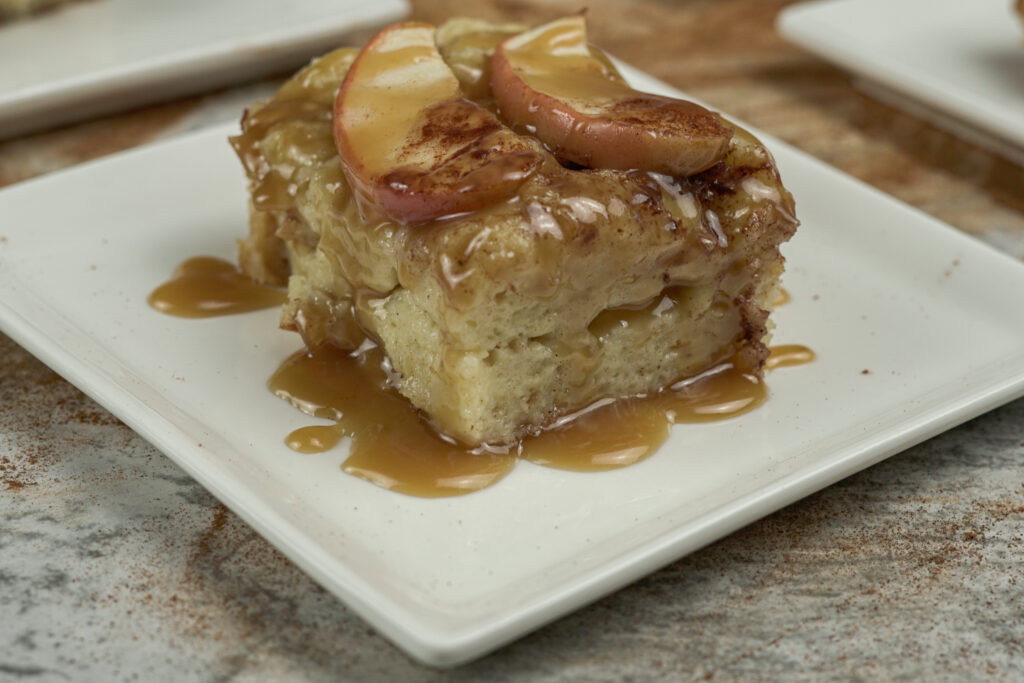 For the caramel part of this apple bread pudding you are going to make a simple caramel sauce. While the bread pudding is baking in a small sauce pan over medium heat, melt the butter.

Add in the brown sugar, cream and vanilla and bring to a boil. Turn down the heat to medium low and allow the caramel sauce to simmer/slow boil, stirring frequently for about 3-4 minutes until the caramel sauce thickens to a syrup like consistency. 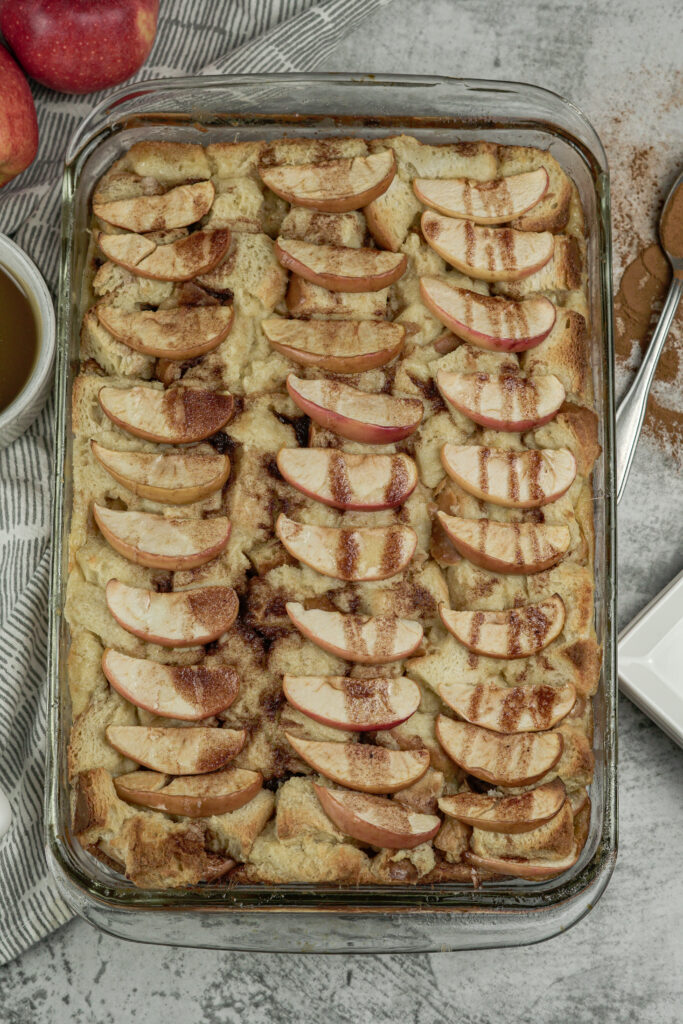 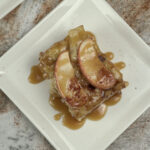 What do I do with Apple Bread Pudding Leftovers?

If we ever have leftovers of this delicious apple bread pudding, I simple cover the pan with plastic wrap or place in an air tight container and store in the refrigerator.

This will be good for up to 3 days after you make it. Simply take a slice of what you would like and heat it up in the microwave. Just as good, if not better than the day it was made.

Can I make Apple Bread Pudding ahead?

You can make this recipe in advance of when you are serving it. I would only plan to make this 1-2 days before you need it. Make the recipe all the way through, allow to cool to room temperature. Cover with plastic wrap and store in the refrigerator. Reheat in the oven at 350ºF for about 30 minutes, or until heated through before serving.

Caramel Apple Bread Pudding is a simple breakfast or brunch recipe loaded with apple slices, cinnamon, sugar, milk, cream, eggs and breadcrumbs. Baked just right, so it is like a tasty pudding all drizzled with a simple Caramel Sauce.