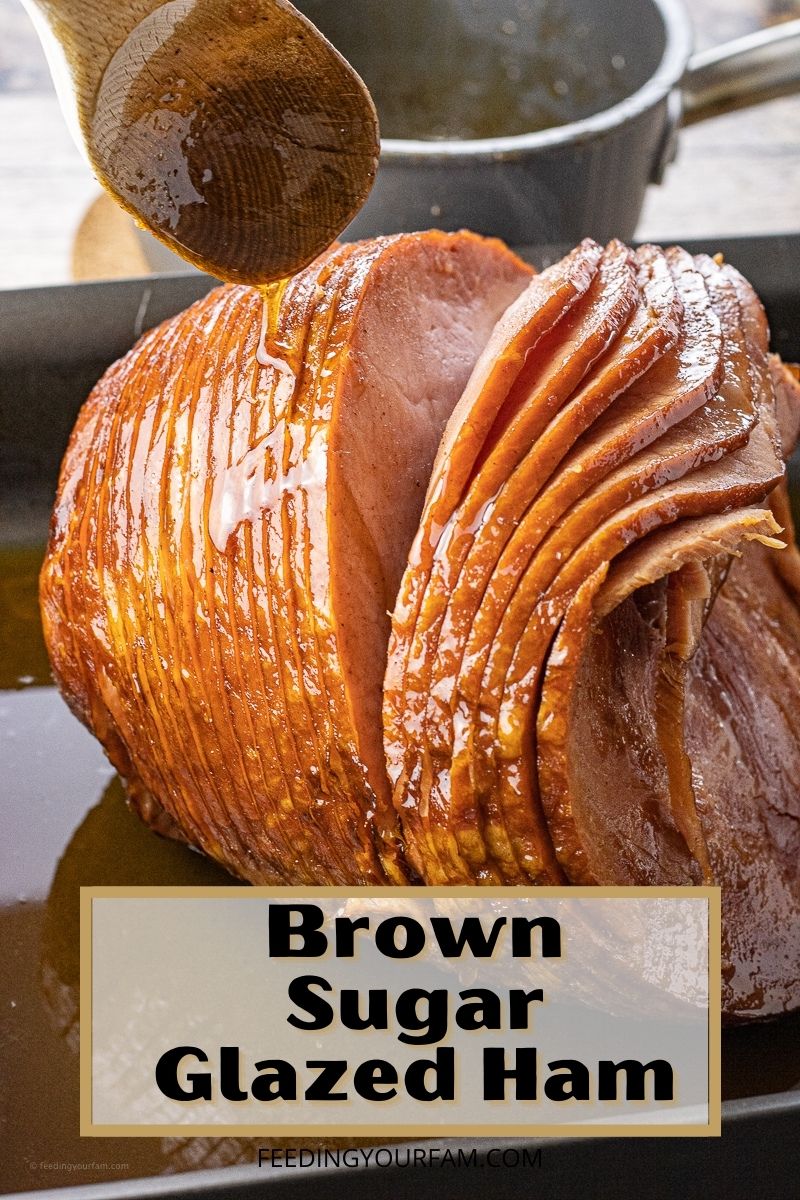 This Brown Sugar Glazed Ham is the perfect main dish for any meal. The ham is moist and delicious on the inside and coated with a sweet glaze of brown sugar, maple syrup, apple juice and warm spices. The Brown Sugar Glaze adds a ton of flavor and just a little crunch to the outside of baked ham.

Ham is such a simple protein to make for Holidays (Christmas and Easter) or we even love to make this recipe during the week or for a Sunday dinner. The leftovers are the best too. Perfect for making breakfast casseroles or even a delicious Ham and Cheese Frittata.

What Kind of Ham Should I Use?

How to Bake A Ham

To make this simple baked ham recipe start by removing all of the packaging from the ham. Be sure to remove the small plastic disk that is on the center of the cut side of the ham, on the bone.

Place the ham, cut side down, into a large roasting pan or baking dish. I like to put about 1/4 cup of water into the bottom of the pan to help keep some moisture in the pan while the ham heats up. Cover the pan tightly with foil and place into a 300 F oven.

How Long to Bake Ham

How Much Ham Per Person

If I am making ham for a Sunday dinner, I usually plan for about 3/4 pound of ham per person. For holidays it is more like 1/2 pound per person since there are usually so many other foods to choose from and fill plates with, people tend to eat less ham.

The brown sugar glaze is sort of the star of the show in this recipe. It adds so much flavor to any baked ham, they whole fam will be raving!

To make this brown sugar ham, combine the ingredients in a small sauce pan over medium high heat and stir until the sugar is dissolved and the contents have come to a boil. Turn down the heat to medium and continue to boil for 7-10 minutes, stirring occasionally.

The sauce will simmer down and start to thicken. You are looking for a sticky, syrup consistency. Remove from the heat until ready to drizzle on the ham.

When to Glaze the Ham

Allow the ham to come up to 140º F. Remove the ham from the oven and turn onto its side. Brush or drizzle the glaze all over the outside of the ham as well as between the slices. Turn the oven up to 425º F and place the ham, uncovered back into the oven. Allow it to cook for 10-15 minutes, until the glaze is shiny and golden.

⭐️ ⭐️⭐️⭐️⭐️Tried it and just loved it? Leave me a rating! I would love to hear how it turned out for you! Or even snap a photo and tag me on Instagram @feedingyourfam or #feedingyourfam so I can see what you made! 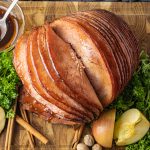 This Brown Sugar Glazed Ham is the perfect main dish for any meal. The ham is moist and delicious on the inside and coated with a sweet glaze of brown sugar, maple syrup, apple juice and warm spices. The Brown Sugar Glaze adds a ton of flavor and just a little crunch to the outside of baked ham.

What to serve with Baked Ham:

These are some of the side dishes we love to eat with glazed ham: